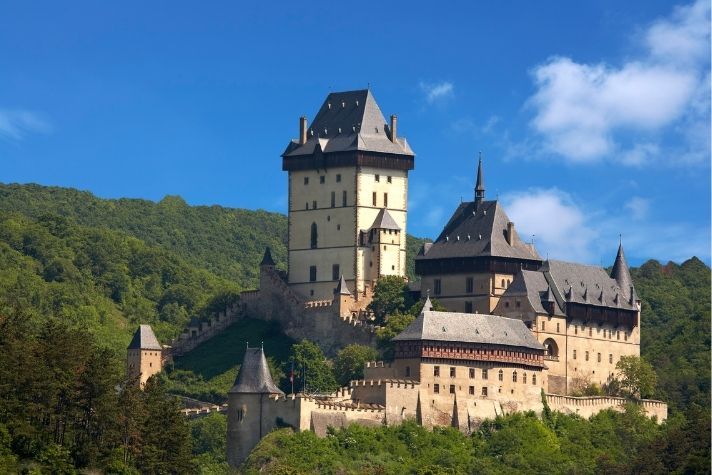 There is no other beauty near Prague city than Karlštejn Castle. Founded on June 10, 1348, by Charles IV, was built in the High Gothic style not only as an imperial residence but especially as a fortress, designed to preserve Charles' collection of holy relics and imperial coronation jewels. The construction and decoration of the castle were completed with the consecration of the chapel of St. Crosses 9.2.1367, where the imperial coronation treasure was stored. During the Hussite wars, Karlštejn became a place of permanent storage of the coronation jewels of the Czech kings, where they were stored for almost 200 years. In addition to its own purpose, Karlštejn is also exceptional for its architectural form and interior decoration. The impressive, stepped arrangement of the individual parts of the castle is very impressive. The lowest Well Tower and the Burgrave's Office served normal traffic, the massive Imperial Palace topped by a cylindrical tower was intended for residential and representational purposes. In the lower Marian tower is the church of the Virgin Mary with murals from the mid-14th century and the chapel of St. Catherine. In terms of construction, Karlštejn was remodeled in late Gothic style after 1480 and was rebuilt in the Renaissance style in the last quarter of the 16th century. During the last building modification and reconstruction from the end of the 19th century, the castle acquired its present-day romantic appearance.

Konopište castle was built around 1294 by Tobias of Benešov. Gothic was modified at the beginning of the 16th century. After 1725, the castle was rebuilt in the Baroque style by Jan Josef of Vrtba. The castle was built on the model of French fortresses, with round towers, a fence, a drawbridge, and 4 gates. After the Benešovic family died out, the castle passed into the possession of the Šternberk family for many years in 1337.

During the Battle of Bílá Hora (1620), Konopiště was briefly owned by Albrecht of Valdštejn - the heir of the estate, Přech Hodějovský of Hodějov, took part in the anti-Habsburg resistance and most of his property was confiscated after the suppression of the uprising. After 1725, the castle was extensively rebuilt in the Baroque style into a comfortable residence. In 1887, Archduke František Ferdinand d´Este bought the chateau and manor from the Lobkovics, who had the chateau rebuilt in a historicist style and had its surroundings converted around 1900 into a landscape park, complete with a park. In 1921, the chateau was taken over by the Czechoslovak state from the heirs of F. F. d´Este, and the chateau and the park were partially opened to the public Since 1994, private rooms inhabited by the Archduke and his family have also been open to the public. The kilns underwent reconstructions in 1995-2000 and will serve their original purpose - rare thermophilic plants are grown here. 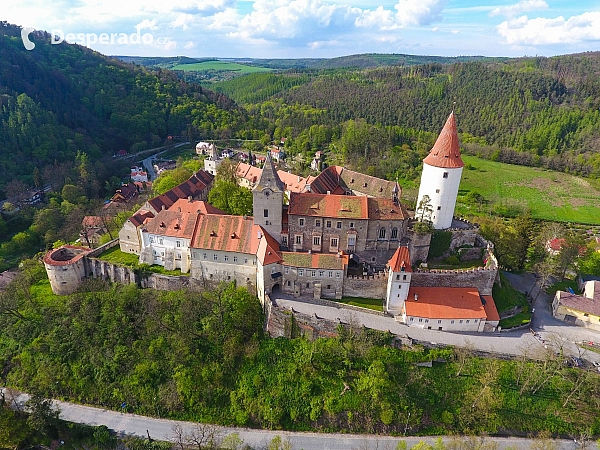 Have you thought about visiting one of the oldest castles in Czech history? Křivoklat castle is not only one of the oldest, but also one of the most important castles of Czech princes and kings. Late Gothic interiors, royal chapel, and hall, library, chateau, torture chambers, a large tower with an exhibition of hunting and fortifications. The guide of this castle claims that it is the coldest castle in Bohemia. Also worth seeing is the castle chapel. A large Gothic castle, originally a hunting castle of the Přemyslids dynasty, was rebuilt at the end of the 15th century for Vladislav Jagiellonsky. In the 16th century, Křivoklat was meant to be a prison. Unfortunately, Křivoklat burned down in 1643. At the turn of the 19th and 20th centuries, Křivoklat was again reconstructed for the Fürstenberks dynasty. 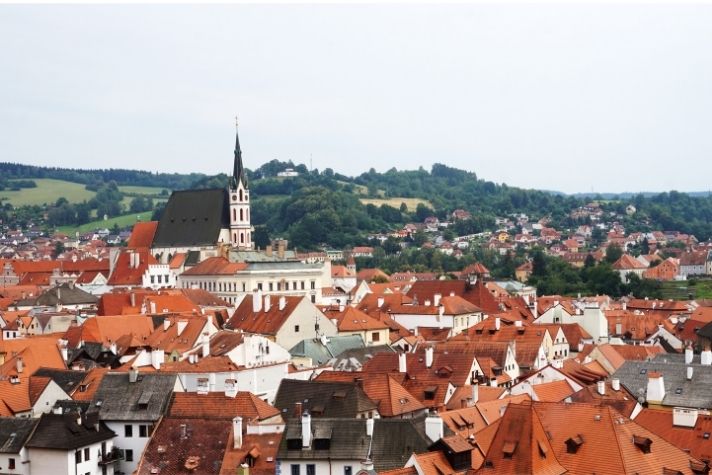 The castle was built around 1241, by Zdeslav of Divišov. In the 14th century Česky Šternberk was rebuilt as in 1467 it was conquered by the troops of George of Poděbrady. Zdeslav's descendants during those times held the rule over the castle. In 1753, a new chateau building was introduced on the forecourt. The last significant reconstruction took place in the mid-1990s, and the castle was formed into its present form by minor interventions in the 19th and early 20th centuries. Nowadays, preserved castle lays on a narrow descending ridge, following the left bank of the Sázava in the village of the same name.

The city of Terezín, founded at the end of the 18th century as a military fortress, is today known primarily as a tragic symbol of the suffering of tens of thousands of innocent people. During World War II, it served as an internment camp for the Jewish population and became a transfer station on the way to the extermination camps. At the end of the 18th century, Terezín was founded as a fortress. After the occupation of Czechoslovakia by Hitler, the Nazis discovered the Small Fortress and established a police prison there in 1940. It had served as a prison before; in 1918, for example, Bosnian Serb political activist Gavrilo Princip died here, assassinating the successor to the Austro-Hungarian throne, Franz Ferdinand d'Este, and his wife, Zofia, in Sarajevo in 1914. From 1941, a ghetto was established here, where citizens of Jewish origin were gradually deported. They were to be concentrated here until the extermination camps in the east were ready for their final destruction. After the liberation of the Terezín fortifications (Main and Small Fortress), modern for its time, it gradually became obsolete and after the loss of military function, it fell into oblivion. In the consciousness of our and the world public, it came to life again and in 1947, at the initiative of the government of renewed Czechoslovakia, the Terezín Memorial was erected here in places of tens of thousands of people, originally as the Memorial of National Suffering.

If you are somehow interested to follow the tragic path of victims of WWII, then you should visit a village called Lidice. The first mention of the Lidice school comes from 1690, namely the branch of the Lidice school in Buckov The tragic change was prepared for Lidice by the occupation of Czechoslovakia. In September 1941, the head of the SS-Obergruppenführer security police and security service and Reinhard Heydrich, the general of the SS-Obergruppenführer, were appointed deputy Reich Protectors to suppress the growing anti-fascist resistance. The fate of the people of the Czech nation was stirred up by the decision of the Czechoslovak government in London - the plan of the assassination of Reinhard Heydrich. The attack of Czechoslovak paratroopers, in which Heydrich was mortally wounded on May 27, 1942, brought events that excited the whole world. The fate of a small village with 503 inhabitants began to materialize on June 10, 1942, several hours after midnight. On the fateful day, 173 men from Lidice were shot dead in the garden of Horák's farm by order of K. H. Frank. The women and children were taken to the gymnasium of the current Kladno grammar school, where, however, they were forcibly separated after three days. Except for children selected for Germanization and children under one year of age, they were all mercilessly poisoned by exhaust fumes in specially adapted cars at the Nazi extermination camp in Chełmno nad Nerrem, Poland. Nowadays, a statue of Lidice children and mother has been erected at the ruins of the said village, as the memento of this tragic day. 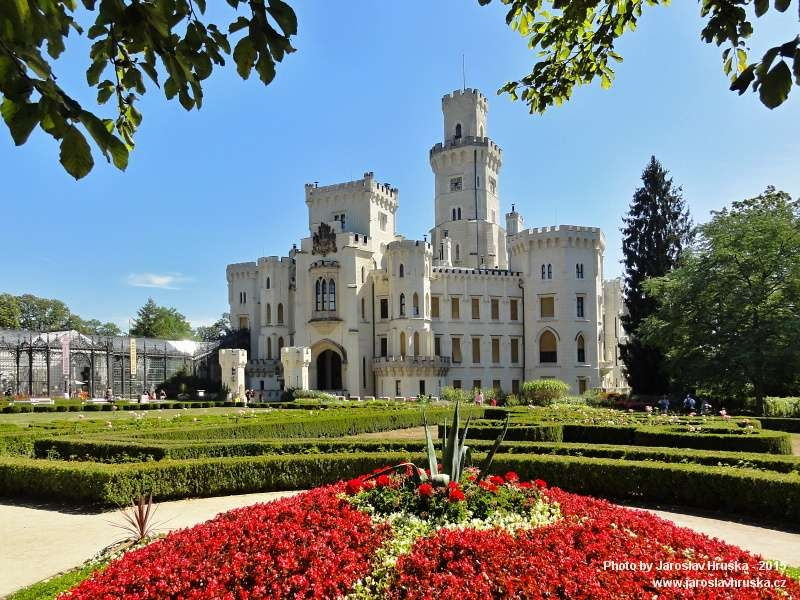 This is how a fairy-tale look like. This magnificent castle is standing on the site of the original castle from the 13th century. In 1661 it acquired a Baroque appearance. Hluboká acquired its present appearance in the 19th century thanks to reconstruction in the style of English Neo-Gothic. The interiors with the Schwarzenberg collections are just as magnificent. The most important neo-Gothic building in the Czech Republic, inspired by the English royal castle Windsor. Adjacent to the castle is an extensive English park with a number of rare trees and the possibility of walks with views of the countryside. 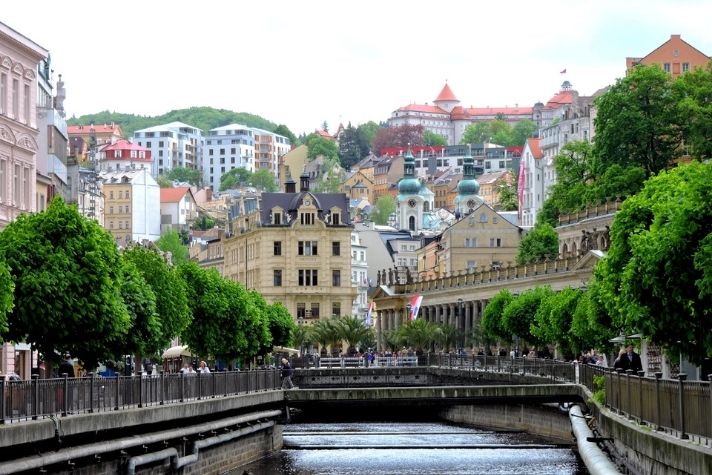 Your body needs soothing and your mind also needs some relaxing time. What do you think? Have you heard of Karls Bad and Marien Bad? The exact date of the city's founding is unknown. The permanent settlement around Vřídlo was established in the middle of the 14th century. In 1370, the city was granted by Charles IV. privileges of the royal city. The legend of the founding of Karlovy Vary, recorded in 1571 by Dr. Fabian Summer, says that a hunting dog began to hunt a piece of wildlife during an expedition in the woods, falling into the pool of a rapidly gushing spring with hot water. The groaning of the dog summoned the other members of the expedition, who then tasted the hot water. Charles IV was also informed about the find, who went to the place of the spring. Together with the doctors present, he stated that this hot water has healing effects, which he subsequently tested himself and improved. He then founded a spa called Teplé lázně u Lokte on the site of the alleged spring. It is the most visited Czech spa town. Since 2021, it has been on the UNESCO World Heritage List under the item Famous Spa Cities of Europe.

Architectural pearl, a city in the park and park in the city. Treasury of healing mineral springs. The spa, along whose promenades walked famous personalities from all over the world.

Mariánské Lázně (Mariens Bad) is the second-largest Czech spa, with a great wealth of mineral springs. There are 40 of them in the area and almost 100 in the immediate vicinity. The territory of the current spa belonged to the Premonstratensian monastery in Teplá, whose abbot K.K. At the instigation of the monastery doctor J.J.Nehr, Reitenberg pushed through the construction of the first spa at the beginning of the 19th century.

The main spa promenade and an important architectural monument is the pseudo-baroque cast-iron colonnade from 1889. The Křížový, Karolinin and Rudolfův springs are brought to the drinking cures. In front of the colonnade, a singing fountain enjoys great attention. The most famous other springs are Ferdinand's, Lesní's and Ambrož's. 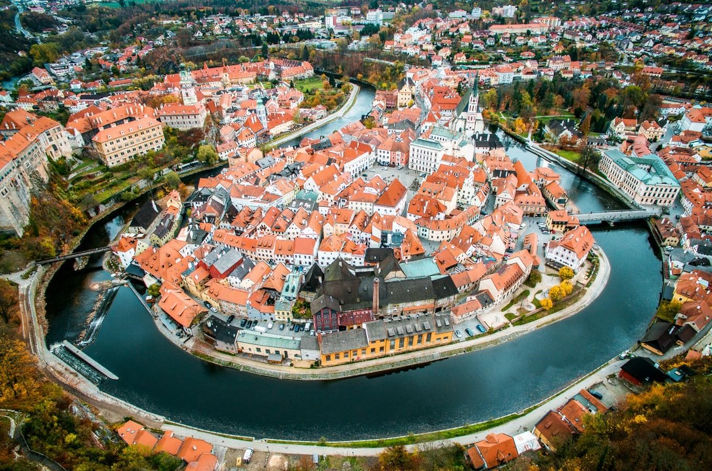 What can you expect from UNESCO Heritage town? A tangle of beautiful medieval streets, picturesque gables of townhouses, an impressive castle above the Vltava, cafes and medieval taverns, exhibitions, concerts, festivals - all of this is Český Krumlov. The crown of Český Krumlov is a castle and chateau with a beautiful tower, which, the Czech writer Karel Čapek claimed to be the "most towering" of all the towers he knew. If you plan to visit this fairy-tale-like castle, you can expect to visit the famous Masquerade Hall and the castle theatre, one of the best-preserved Baroque scenes in the world. The Český Krumlov chateau also includes bears, which have been bred here since the time of the last Rosenbergs, a lapidary, the Cloak Bridge, and the chateau garden with a unique natural theatre with a revolving auditorium. 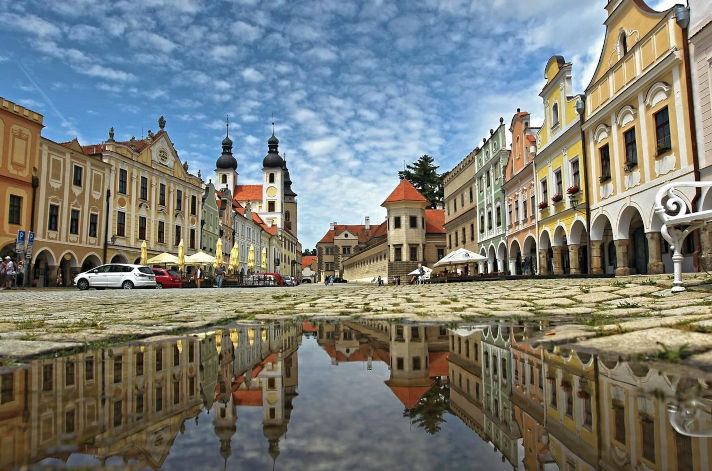 Telč is a city with a beautiful historic square, lined with Gothic and Renaissance burgher houses with arcades and richly decorated gables. Since 1992 Telč has been inscribed on the UNESCO World Heritage List. In a city with a unique fairy-tale atmosphere, you will return to the Renaissance ages at least for a while. That sounds simply magical! Directly from the square, you can enter the Telč chateau, a magnificent Renaissance mansion decorated with stucco and sgraffito, which is reflected on the surface of the pond nearby. What are the main attractions inside the castle? You can look forward to the Knights' and Golden Halls and the Chapel of All Saints (1580) with the marble tomb of Zachary of Hradec and Catherine of Wallenstein, who during their lifetime imprinted Telč on the face of Italian Renaissance architecture and the atmosphere of the sunny south. Let's not forget about the landscaped Renaissance Garden with arcades and the castle park with a charming Classicist greenhouse.